I did not name Quinn after the old song, “Mighty Quinn the Eskimo”, although I do jokingly call her Mighty Quinn. I actually named her after the fifth element, quintessence. Also known as “aether”, it is the “material that fills the region of the universe above the terrestrial sphere”. Physicists know it as “dark matter“. Fittingly, Quinn is rather dark and she is a force to be reckoned with.

Quinn was purchased from Cathy Rubens of Silverhill Rottweilers here in NC. Since the litter was born Oct 9th, 2016 right after a Hurricane Matthew came through the area, Cathy decided the theme would be storm related. So I named her Silverhill’s Rainbow After the Storm. We’ve never had a puppy that young before so it was, and still is, a challenge! That was the Storm. As Quinn matures, her Rainbow comes out more and more. She is a smart girl, loving, and adorable. She’s also strong willed so the storm is still around.

I looked for over 3 years for Quinn. My first Service Dog, Joella, died in Dec 2012. A year later, we took in Whisper, an 8yr old German Shepherd who had been someone’s Service Dog. Her health wasn’t good so we retired her, giving her small jobs here at home to satisfy that GSD need to do something. By then, I was thinking it was time to start looking for a full breed Rottweiler. I had Mike who I had gotten to “replace” Joella back in ’08 but he did not work out. I again tried to see if he was willing to work but he just didn’t seem to want to. I wanted a full breed dog and I wanted a puppy. Because of fostering and rescuing, we have had 11 dogs stay, 14 cats stay, and 15 foster dogs/cats come and go. That’s 40 critters since 1992. I figured if I wanted to pay big bucks for a full breed dog, I can do so guilt free.

I could not have gotten a puppy without my friends on Facebook and in Real Life. Two friends encouraged me to start a GoFundMe page and I did. Then another friend (Lynn Ames) heard of it and announced it on her Facebook page. Donations exploded. I did not reach the ultimate goal but it was more than enough to help quench the holes in my wallet. Quinn is worth every cent. From the new fence to the health guarantees, it is all worth it. She came with no baggage, no trauma, no unknown health history. I know every bit of her life from birth until I put her in the truck to bring her home. So, yeah, the money is worth it.

Looking for the right breeder was not easy. Long story short, I chose Cathy Rubens. I talked to her on the phone a few times. We picked an upcoming litter and I sent in the deposit. I was getting a puppy! And I knew I was getting the right puppy when the bring-home date for her was going to be on the same day I brought Mike home all those years ago.

Anyway, this is her…blog I suppose. She has a Facebook page (@QuinnSD) and she has her own Instagram (Quinn the Rotten SD) and I may some day start her a sarcastic Twitter account just for giggles. This website has been here for a while but I wanted to wait until she started Service Dog training before I did anything with it. She’s not officially doing any of that but she is moving in that direction. More on that later! 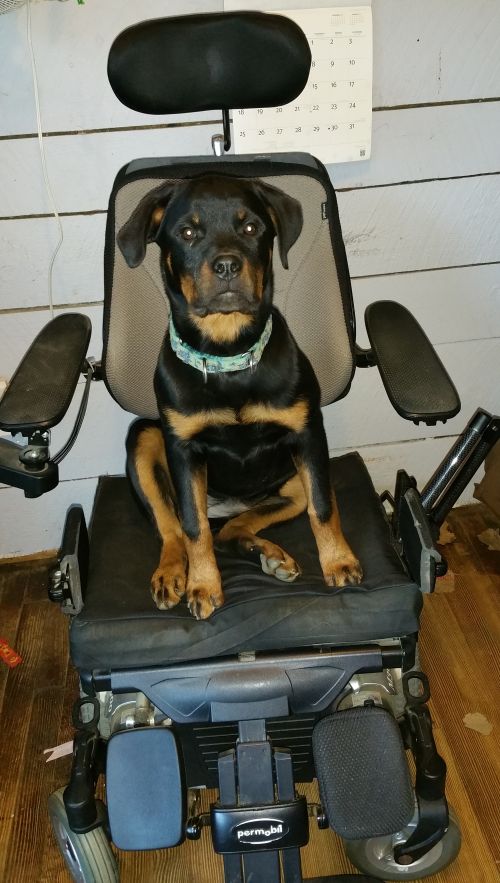